What Style Home Should You Build? Choosing the Right Architecture for Your Area

You have found the perfect location to build your new home, but what style really fits in with the surrounding area? While architecture styles are fairly malleable and there are no hard and fast rules for picking a style, the history of the designs help dictate where they fit best. Planning your home based on the original architectural purposes ensures it holds both form and function on the building lot. Who Should Build This Home: Because of the historic significance, the Victorian style blends well in older cities with rich histories. History buffs and antiquing fans should consider this style for their new home.

One of the oldest home styles still in use, log cabins trace their origins as far back as 3500 B.C. in areas of Scandinavian, Germany, Northern Russia, and Eastern Ukraine. The cabins were easy to assemble, required no nails, and plentiful lumber meant cheap construction.

Brought to the United States in the 1600s, log homes found mainstream success and popularity. Log cabins could be quickly assembled to provide protection from harsh winters. Many log homes started as one-room dwellings but grew each year, as additions were easy to build once spring arrived.

Log homes aesthetically work in any location but are found most often in a rural setting. However, the climate of the surrounding area dictates the type of wood that should be used in construction of the log home.

Who Should Build This Home: Log cabins look best in rural settings rich in natural appeal. The outdoorsy type typically opts for this rugged style. As surmised from the name, the Cape Cod style originated in New England in the 1600s. Based on England’s thatched cottages, these Northeastern abodes boast steeper roofs and larger chimneys that withstand the bitter New England winters. Shuttered windows flank the front door, which customarily stands out in a contrasting color. Cedar shingles commonly cover the slanted rooftop and a white picket fence surrounds the small, but well-kept yard.

Cape Cod homes blend in with the surrounding landscape, with natural colors and subtle design elements pervading the style. Although the Cape Cod was originally popularized during World War II, this style has made a comeback in the housing market.

Who Should Build This Home: Cape Cods offer builders a trendy style with quaint and cozy charm. Although popularized in New England along the shores, Cape Cods are currently popular in suburbs along the entire eastern coastline. These craftsman homes abound in California, the Northwest, and New Jersey, but the natural style gained supporters in rural areas as well.

Who Should Build This Home: Are you big on the DIY movement? True to its name, the craftsman style attracts followers that seek to focus more on undertaking projects themselves and prefer to use only natural elements in their building process. 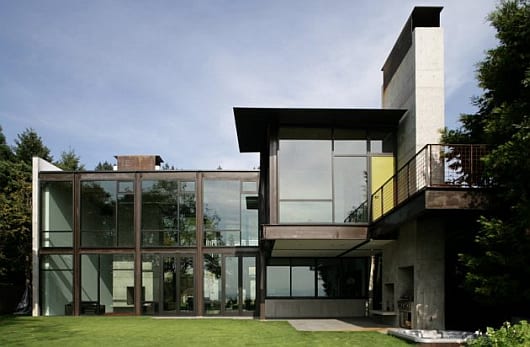 Modern architecture took root after World War II and has steadily gained popularity in the 21st century. Characteristics of the style include simplicity, 90-degree angles, and the elimination of any unnecessary and ornate details. Adherence to a strict structure defines modern architecture and industrially produced building materials make up the modern home.

The modern style emerged as a reaction to Victorian extravagances. The contemporary architecture symbolizes the common struggle between the old and new. While the style has been adopted internationally, particularly in German cities like Berlin, it can be found in the larger U.S. cities such as Los Angeles and Chicago.

Who Should Build This Home: The ecologically conscious homebuilder embraces the modern architectural style. Environmentalists living in the suburbs of the bigger cities will find this style most suitable to their lifestyle. The colonial style was popular in America from the 1600s to well into the 19th century. Many variations of the style arose due to the diversity of America in the 1600s, and colonial style homes cropped up in many states including Florida, Louisiana, New Mexico, Texas, Arizona, and California.

Who Should Build This Home: Elegant and formal, the Colonial style home is popular in the Southeast. Builders that appreciate symmetry and the classic plantation style homes find a perfect match in the colonial style. Taking its name from the area the style originated in, Mediterranean architecture became extremely popular in the United States between 1920-1940. The architecture emulates the hacienda style known for red tile roofs, stucco walls, and arched windows. Mediterranean style made a comeback recently, especially in California and Florida. The multicolored tiling and beautiful balconies pair perfectly with palm trees and other vegetation found in these warm climates.

Who Should Build This Home: Builders located in warmer climates such as California, Florida, and South Carolina. These homes look best with luxurious gardens, so if you are not interested in gardening (or hiring someone to maintain the grounds), this may not be the home for you. Originally built in the 1920s, ranch homes get the name and style from their resemblance to rural Western ranches. Ranch architecture is typified by open floor plans and easy connections to the outdoors. The ranch style focuses chiefly on practicality. Usually, these homes are only single story buildings, although some more contemporary ranchers are built on a hill, allowing for a hidden second story. Most ranch homes attach directly to the garage, extending the layout of the home.

Previously found mainly in southwestern states, ranchers began appearing along the East Coast and in many midwestern states, as well. The style fuses modern architecture with Western period working ranches.

Who Should Build This Home: The simplicity and low cost of rancher style homes appeal to many homebuilders. Additionally, these efficient homes fit into any landscape and climate, making it an optimal choice for just about any homebuilder. This style originated in England but became popular in established American neighborhoods during the first half of the 20th century. The steep-pitched roofs function well in rainy and snowy climates, making it a common house style in the Midwest and all along the East Coast.

Who Should Build This Home: Tudor houses best fit homebuilders looking for a unique yet classic architectural style. Their stark coloring and diamond-shaped windowpanes distinguish Tudor homes from other architectural styles. Homebuilders should consider the Tudor style if building along the Eastern Seaboard or in Midwest areas rich in vegetation.

An ill-placed home stands out, and not in a good way. Picking the wrong style ruins the careful planning that goes into building a new house. Avoid this egregious mistake by considering the landscape and surrounding area before you choose an architecture style for your next home.

To download our free plan book, simply fill out this form.